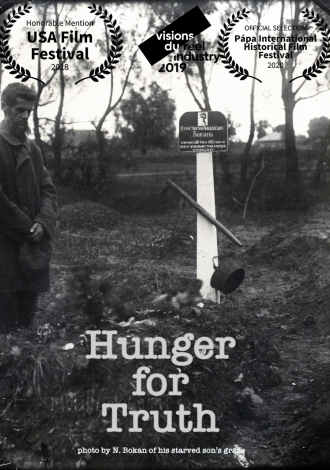 4/5
Thank you! Your vote has been counted.

In an age when disinformation muddles the truth, a newly discovered voice cuts through the historical haze. She is Rhea Clyman, a young Canadian reporter who traversed the starving Soviet heartland when Stalin’s man made famine was just beginning in Ukraine. Clyman’s newly discovered newspaper articles for Toronto and London newspapers in 1932 show her remarkable resourcefulness and courage. After she was banished from the USSR for writing about the Holodomor and the Gulag, this brave woman went on to cover Hitler’s early lethal years in power.

The feature length documentary interweaves Clyman’s truth telling trip in the 1930’s with today’s conflict in eastern Ukraine. Three years into Ukraine’s forgotten war, its soldiers are still dying in trenches and held as prisoners of war. In central Ukraine two little girls are growing up without their dad Serhiy Hlondar. He’s a member of Ukraine’s Special Forces who was captured in the battle of Debaltseve, a day after Russian led forces were meant to silence their guns in the Minsk 2 Peace Accord. Hlondar has never seen his youngest daughter, and after 1100 days of captivity his family has only a handful of letters to keep their hopes alive.

Bohdan Woloshynowych
A very very moving and well put together documentary film. I had heard of the bravery of Gareth Jones and Malcolm Muggeridge but not of Rhea Clyman. She was truly a pioneer journalist in what was possibly then a very male dominated profession, however had reported the truth and that is all you ask from a professional. Will share this link with my friends as feel they must see this film too. Thank you Takflix.
Like 2
Dislike 0

Jake Finn
This film is important, teaching us about a forgotten genocide, the Holodomor, and presenting the continued genocide of the Ukrainian people by the Russians. It shows how Russia has continually tried to erode any possibility of a Ukrainian state. It shows us human figures present in Ukraine's history. But also this film is so ugly... I am sorry, it really is... The special effects, mixing Dziga Vertov clips with other Soviet imagery, the attempts to make archive photos and newspapers more vivid... Not to mention the transparency effects... I am grateful that this film exists, it is interesting but it isn't as visually rich or as compelling as other recent Ukrainian documentaries by Loznitsa (Maidan, The Event, etc...) or documentaries like Heat Singers, Cacophony of the Donbas, The Living Fire, Enter Through the Balcony, Varta1, Lviv, Ukraine, The First Company or All Things Ablaze.
Like 1
Dislike 0
×